The Central Valley Project, one of the Nation`s major water conservation developments, extends from the Cascade Range in the north to the semi-arid but fertile plains along the Kern River in the south. 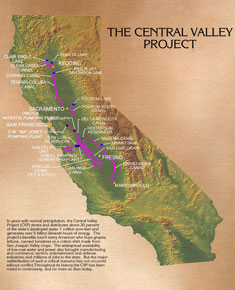 The CVP serves farms, homes, and industry in California`s Central Valley as well as major urban centers in the San Francisco Bay Area; it is also the primary source of water for much of California`s wetlands. In addition to delivering water for farms, homes, factories, and the environment, the CVP produces electric power and provides flood protection, navigation, recreation, and water quality benefits.

Did you know that the CVP…